Thibodeaux Junior is on phone from University of Louisiana-Lafayette to New Iberia . . .

Thibodeaux Sr: "I'd be in such a shock, I'd probably have me a heart attack." 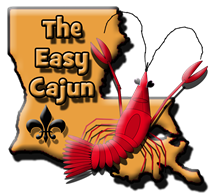 Boudreaux was on a business trip this past week when he decided to stop in at a barber shop for a shave. While he was waiting for the barber to shave him, a rather good looking young lady came over to him and offered him a manicure. Boudreaux decided that would be nice (since she was sooo good looking).

While getting his shave and manicure he couldn't help himself and started talking trash with the young woman. "Hey baby, how 'bout you an' me goin' out on da big town tonight?"

She tells him, "I don't think my husband would approve of that."

Boudreaux says, "Aw, don't you worry none 'bout you husband. He'll never know. Jus' told him you had to work late."

The pretty young thing replies, "Why don't you tell him that I have to work late. He's the guy with the straight razor standing behind you!"

For the Beer Drinkers :-)

The CEO's of Budweiser, Coors, Killians, and Guinness all enter a bar. The bartender starts taking orders.

The CEO of Budweiser says "I'll take a Bud Light. It's crisp, refreshing, and doesn't hurt the budget!" The bartender moves down the line.

The CEO of Coors says "I'll take a Coors light. It's colder, even more refreshing, and won't give you a beer gut!" The bartender moves down the line again.

The CEO of Killian's says "These guys are amateurs, give me a Killian's Irish Red. It's smooth, flavorful, and distinct!" The bartender moves once again on down the line.

The CEO of Guinness says "I'll have a water." The others all give a confused look.

He responds, "Well, nobody else did."

A young Cajun dude was pulled over by the Louisiana state police for speeding. The officer stepped out of his patrol car, adjusted his sunglasses, and swaggered up to the young man's window. "What you driving so fast for son? You going to a fire? Let me see your license, boy."

The young dude handed over his license. Then the officer noticed that the back seat of his car was full of large knives. The officer said, "Tell me boy, why you got dem knives on dat back seat?"

The officer spat some tobacco juice and then he said, "A juggler; well you don't say.  Boy, put your hands on da trunk of dis car; you are going to jail son!"

The young Cajun dude pleaded with the officer not to take him to jail. He offered to prove to the officer that he was a juggler by way of demonstration. He said, "You can even hold me at gunpoint while me I juggle for you officer." The officer reluctantly decided to allow the Cajun dude to prove his point while he held him at gunpoint.

Meanwhile, two miles down the road at City Bar, Boudreaux was drinking it up with his friend, Thibodeaux. He soon left and got into his old, rusty pick-em-up truck. He proceeded down the road trying his best to stay on the right side of the road.

Suddenly, Boudreaux spotted the most unbelievable sight of his life! He then drove to the nearest phone booth and dialed the number for City Bar and asked for his buddy, Thibodeaux.

When Thib got on the phone Boudreaux said, "Whatever you do Thib, when you leave dat bar, don't go north on highway 442. The state police are giving a sobriety test dat ain't nobody can pass!!"

The Baptist preacher just finished his sermon for last Sunday's worship service. He proceeded toward the back of the church for his usual greetings and handshaking as the congregation began to file out of the little Louisiana Southern Baptist Church.

After shaking a few adult hands, he came upon the seven year old son of one of the Deacons of the church. "Good morning, T-Boud," the preacher said as he reached out to shake his Cajun cousin Boudreaux's young son's hand. As he was doing so, he felt something in the palm of T-Boudreaux's hand. "What's dis?" the preacher asked.

"I don't want to take your money," the preacher answered.

"I want you to have it," said little Boudreaux. After a short pause he continued, "My daddy says you is da poorest preacher we ever had and I wants to help you."

Boudreaux and Marie were speeding along on the Interstate 10 high rise bridge over Whisky Bay when Boudreaux saw the red-lights flashing in the rearview window.  Boudreaux pulled over as well as he could to the side of the bridge.

The State Trooper walked up to the window with his clipboard in his hand.  He asked, "Did you know that you were going 80 miles an hour and the speed limit on this bridge is 60?"

Boudreaux looked at the carpet of the truck for the cigarette he dropped.  He said, "Nope. I was going 60."

The Trooper sounded a little fed up as he looked at his clip board and said, "Nope. I clocked you at 80 fella."  The trooper looked over at Marie, who was sitting quietly and looking out of the passenger window at the cypress trees in the water.

Marie walked into da kitchen and saw Boudreaux wit a fly swatter.  She axed him, “Any Luck?"

Marie axed, “Mais cher, how can you tell dem apart?"

Boudreaux say, “Mais dats easy cher . . . tree was on dat beer can and two was on da telephone."