Another Cajun's Version of

Day 1 - Dear Emile, Tanks for da bird in da Pear tree. I fixed it las night with dirty rice an it was delicious. I doan tink da Pear tree would grow in da swamp, so I swapped it for a Satsuma.

Day 2 - Dear Emile, Your letter said you sent 2 turtle dove, but all I got was 2 scrawny pigeon. Anyway, I mixed them with andouille and made some gumbo out of dem.

Day 3 - Dear Emile, Why doan you sen me some crawfish? I'm tired of eating dem bird. I gave two of dose prissy French chicken to Mrs.Fontenot over at Grand Chenier, and fed da tird one to my dog, Phideaux. Mrs. Fontenot needed some sparring partners for her fighting rooster.

Day 4 - Dear Emile, Mon Dieux! I tole you no more of dem bird. Deez four, what you call "calling bird" wuz so noisy you could hear dem all da way to Lafayette. I used dey necks for my crab traps, and fed the rest of dem to da gators.

Day 5 - Dear Emile, You finally sent something useful. I liked dem golden rings, me. I hocked dem at da pawn shop in Sulphur and got enough money to fix the shaft on my shrimp boat, and to buy a round for da boys at da Raisin' Cane Lounge. Merci Beaucoup!

Day 6 - Dear Emile, Couchon! Back to da birds, you turkey! Poor egg sucking Phideaux is scared to death ah dem six goose. He try to eat dey eggs and dey pecked da heck out ah his snout. Dem goose are good at eating cockroach around da house, though. I may stuff one ah dem goose with erster dressing to serve him on Christmas Day.

Day 7 - Dear Emile, I'm gonna wring your fool neck next time I see you. Ole Boudreaux, da mailman, is ready to kill you, too. The crap from all dem bird is stinkin up his mailboat. He afraid someone will slip on dat stuff and gonna sue him. I let dem seven swan loose to swim on da bayou and some stupid duck hunter from Mississippi done blasted dem out da water. Talk to you tomorrow.

Day 8 - Dear Emile, Poor ole Boudreaux had to make 3 trips on his mailboat to deliver dem 8 maids-a-milking and dem cows. One of dem cows got spooked by da alligators and almost tipped over da boat. I doan like dem shiftless maids, me. I told dem to get to work gutting fish and sweeping my shack . . . but dey say it wasn't in deir contract. They probably tink dey too good to skin all dem nutria I caught las night.

Day 9 - Dear Emile, What you trying to do? Boudreaux had to borrow da Cameron Ferry to carry dese jumping twits you call lords-a-leaping across da bayou. As soon as dey got here dey wanted a tea break and crumpets. I doan know what dat means but I says, "Well la di da. You get Chicory coffee or nuthin." Mon Dieux, Emile, what I'm gonna feed all dese bozos? They too snooty for fried nutria, and da cows ate up all my turnip green.

Day 10 - Dear Emile, You got to be out of you mind. If da mailman don't kill you, I will. Today he deliver 10 half nekkid floozies from Bourbon Street. Dey said dey be "ladies dancing" but dey doan act like ladies in front of dem Limey sailing boys. Dey almost left after one of them got bit by a water moccasin over by my out-house. I had to butcher 2 cows to feed toute le monde (everybody) and get toilet paper rolls. The Sears catalog wasn't good enough for dem hoity toity lords. Talk at you tomorrow.

Day 11 - Dear Emile, Where Y'at? Cherio and pip pip. You 11 Pipers Piping arrived today from da House of Blues, second lining as dey got off da boat. We fixed stuffed goose and beef jumbalaya, finished da whiskey, and we're having a fais-do-do. Da new mailman drank a bottle of Jack Daniel, and he's having a good old time dancing with da floozies. Da old mailman done jump off the Moss Bluff Bridge yesterday, screaming you name. If you happen to get a mysterious-looking, ticking package in da mail, don't open it.

Day 12 - Dear Emile, Me I'm sorry to tell you, but I am not your true love anymore. After da fais-do-do, I spent da night with Jacque, the head piper. We decide to open a restaurant and gentlemen's club on da bayou. The floozies, pardon me, ladies dancing . . . can make $20 for a table dance, and da lords can be da waiters and valet park da boats. Since daa maids have no more cows to milk, I trained dem to set my crab traps, watch my trotlines, and run my shrimping business. We'll probably gross a million dollars next year. 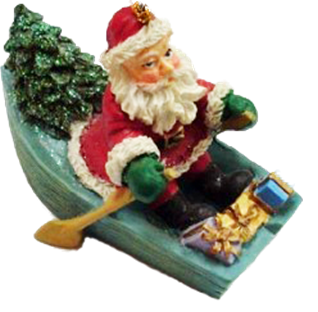 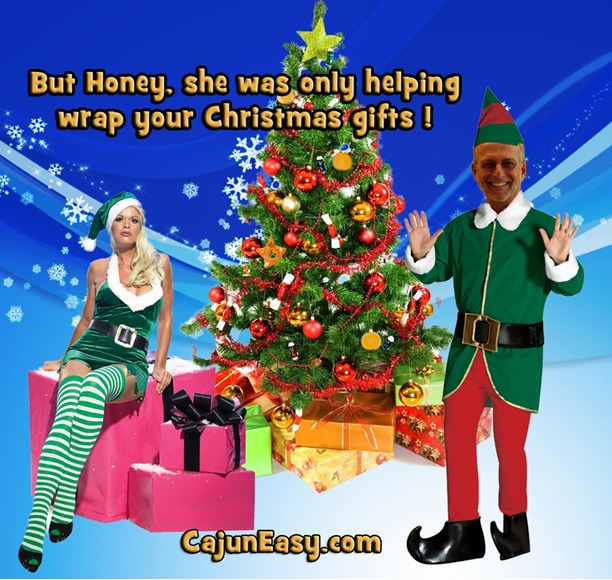 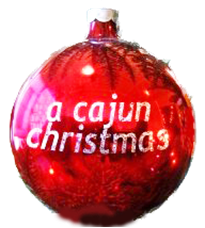